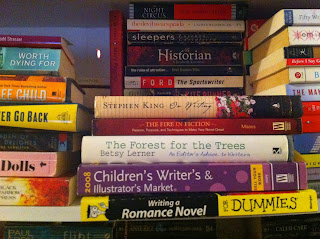 There are countless great books about writing. Books that inspire writers and instruct them. Books about how to make it in fiction and nonfiction.

I have my own list of books I think all writers would appreciate, find useful and enjoy, and they’re all ones that are on my keeper shelf. These books are just a small sample of what’s available for writers, and just a small sample of what’s on my overflowing shelves. Some of them are several years old and the publishing world has certainly changed since they first came out. But the lessons are timeless. They’re books that are great for an agent — and even better for writers.

THE FOREST FOR THE TREES: AN EDITOR’S ADVICE TO WRITERS
By Betsy Lerner
Shortly after I got married I gave this book as a birthday present to my husband. A few months later he had a book contract. I don’t want to say that’s the reason he got it but…

Lerner’s book is valuable because she writes from the perspective of someone who actually bought manuscripts and published books, but she’s also an outstanding writer herself.

ON WRITING
By Stephen King
You’re not going to read this book and instantly sell your own manuscript and start getting Stephen King-type sales. But writers can get plenty of inspiration from this memoir, which offers up King’s own story and his words of wisdom for other authors. King can be brutally honest: “And no matter how much I want to encourage the man or woman trying for the first time to write seriously, I can’t lie and say there are no bad writers. Sorry, but there are lots of bad writers.” But mostly King’s warm and welcoming and inspiring, and one of my favorite parts comes when he — rather brutally — writes a short story and then offers up edits on his own work.

CHILDREN’S WRITER’S & ILLUSTRATOR’S MARKET
Like all of the Market books, this one is constantly updated and revised and remains a great tool for writers searching for info about publishers, agents, conferences and awards. Don’t avoid the early sections, with interviews, success stories and, often, sample queries. It’s always smart to doublecheck online information that might have been updated from the time of the book’s release but having all of this information in one volume is invaluable.

WRITING A ROMANCE NOVEL FOR DUMMIES
By Leslie Wainger
An editor like Lerner, Wainger’s advice is even more focused and straight-forward. She writes about everything from dialogue to when characters should say “I love you” to how to handle rejection.

(Although, now that I think about it, doesn’t the title make it sound like it’s offering advice about how to write a romance novel that readers who are dummies will enjoy?) As a romance reader myself, I object!

THE ELEMENTS OF STYLE
By William Strunk and E.B. White
There are actually a lot of people who think this book has worn out its usefulness. That will happen with any book that was first created a century ago and then updated in the decades that followed. But I still think it’s a great resources for writers looking for a helpful guide to language and grammar. And if you don’t want to read an older book, I think writers should make sure they have some book that includes those types of lessons. As agents we often see the same mistakes over and over again in manuscripts or even queries, mistakes that can damage any chance a writer might have of catching an agent’s eye.

THE FIRE IN FICTION
By Donald Maass
Maass is an agent but also a great writer himself and this has many passages that I underlined the first time I read it and still look at today, including this one, which comes early in the Introduction: “It disappoints me when authors perpetuate the myth that writing is magic. Some allow it to be so. It’s a shame that those writers fail to understand their own process. What’s wrong with that? What’s wrong is simply that magic is unpredictable. A method that’s mysterious cannot be repeated.”

Hopefully some of these books can help writers with that method…while maybe also offering a little inspiration for, yes, some magic.

What are some of your favorite books about writing or the writing life?

Louise Fury represents adult and young adult fiction, including suspense/thrillers, romance, and select nonfiction, as well as novels with a graphic element or illustrations. A native South African, I now live in New York City and travel to Cape Town every year, where I spend time educating South African writers, meeting with international publishers and distributing books. Before agenting, I worked in marketing and advertising for both the consumer markets and publishing. Prior to joining The Bent Agency, I worked as a literary agent at the L. Perkins Agency. I represent numerous New York Times and USA Today best-selling authors and encourage my authors to have one foot in traditional print publishing and the other in the digital arena. I am a huge advocate of utilizing secondary rights—I have sold film/TV, audio and foreign rights for my clients. I believe in staying ahead of the pack by embracing change, not just adapting to it. I'm looking for writers with a unique voice and an unforgettable story. In young adult, I look for manuscripts that are written with an unforgettable voice—this can be deep, dark and gritty or literary, lyrical and emotional. My wish list includes novels with a unique structure or format and books with multiplatform possibilities. I’m also looking for smart romantic comedy. For nonfiction I’m particularly interested in pop culture, cookbooks, true crime, humor, pop science and sports.
View all posts by Louise Fury →
Louise's posts

13 Responses to An Agent’s Bookshelf