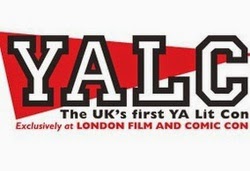 What’s YALC? Well, it’s the first ever UK Young Adult Literature Convention, curated by Children’s Laureate Malorie Blackman and organised by Booktrust, with help from a team of publicists from across children’s publishing.
The event took place over two days during the London Film and Comic Con 2014at Earls Court (a place I’m normally familiar with during London Book Fair – much more fun to see queues of people in cosplay, I can tell you).
I attended on the Sunday, and I didn’t know what I was expecting from the day, but queuing in the mammoth early-bird line, I really did feel like I was amongst my people. I immediately spotted Lucy Ivison, author of LOBSTERS(which if you haven’t read, you MUST), and we chatted about which panels we were looking forward to and speakers we were hoping to meet. Once inside, we bumped into a big group of my favourite bloggers all waiting for the Bloggers Brunch – it’s always fun to catch up with bloggers and hear which new releases they’re excited about. And I loved that so many of them were carrying giant heavy bags of books for signing – in the intense heat of Earls Court, that was a true commitment!
The space at the back of the venue was a fantastic haven from the bustle of the aisles and signing queues. Something about seeing the wall of books and giant beanbags was instantly calming, and I could have spent all day just hanging out in the chillout area and catching up with friends.
I attended many of the panels, and there are some great writeups out there from people who took better notes than me – the best one from Megan Quibell in the Guardian. However, I do have to mention my favourite panel, ‘I’m Too Sexy for This Book,’ a frank discussion about sex in YA from authors Non Pratt, Cat Clarke, and Beth Reekles and chaired by James Dawson. I don’t think I’ve ever laughed more during an author event (James may be Queen of Teen, but Non is surely Queen of Innuendo). It was a lot of fun, but the serious takeaway from the talk is that teenagers have sex and YA books are about teenagers, so if it feels right for the book, then it’s okay to for your characters to have sex and have this shown in a positive way. Kids are very good at self-censoring and often know when a book is too much for them.
It was great to see TBA client love at the event. Katy Cannon’s LOVE, LIES AND LEMON PIES was on the book wall, alongside SPLINTERED by A G Howard. Also, there were lots of posters for ENSNARED, the third book in the trilogy. And I spotted bookmarks and swag for Kat Ellis’ wonderful debut, BLACKFIN SKY.
Other highlights for me was meeting one of my favourite authors, Robert Rankin, and getting a signed book. Also, I was kindly asked to take part on an agents’ speed-pitching event at the end of the day, and it was fun to see a different type of book than those I usually see at SCBWI events or in my slush. Mostly though, my big takeaway was that book people are the nicest people (I knew this already) and that there is a real hunger for UK YA. It’s an exciting time!
A big thank you to Katherine Woodfine and her team for organising, and all the volunteers who made the event run so smoothly. I do hope this isn’t the last we see of YALC!
There were many fantastic write ups of YALC from bloggers and authors – here is a link to some of my favourites:
Jim at The Bookbag
Little Tiger Press/Stripes
Darren at The Book Zone
Author Non Pratt
Lucy at Awfully Big Blog Adventure
Waterstones Blog
Hot Key Books Blog
The Bookseller
And finally some fantastic photos from Booktrust
￩ ￫ x