Former governor of Ohio John Kasich grew up in a blue collar neighborhood in McKee’s Rocks, Pennsylvania, just outside of Pittsburgh. Like many Americans his values were shaped by a childhood rooted in faith, family, community, and common sense.

Kasich is a two-time New York Times bestselling author. His upcoming book, It’s Up To Us, publishes Fall 2019. His work Stand for Something: The Battle for America’s Soul was praised by the likes of Bono, George Stephanopoulos, and Elie Wiesel. Stand for Something directly addresses how we can overcome the erosion of the long-standing, hard-earned values upon which our nation is built. John has also authored Courage is Contagious, a book which highlights the stories of ordinary Americans who have taken amazing measures to make a difference for their communities and our country. 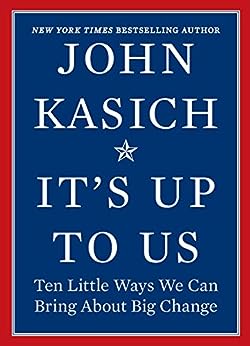